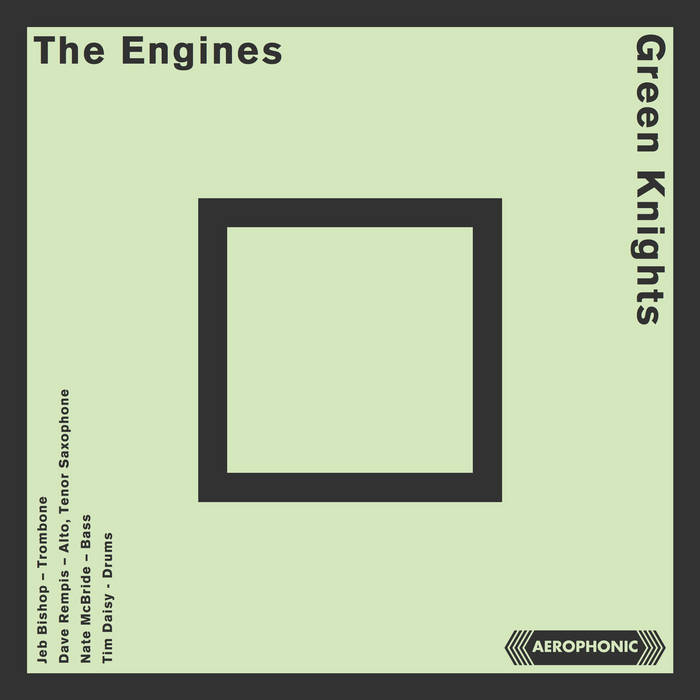 John Cratchley Great, great band, The Engines...this live recording (The Green Mill, Chicago) just hits the sweet spot continuously...
The playing, the improvising, the interplay, the energy and the verve just don't get better than this for me...all Ken Vandermark associates, all quality guaranteed composers.
Lots of exceptional stuff on this label (Dave Rempis' Aerophonic Records) too...check it all out, it's worth your time and effort.

recorded live in Chicago, IL at the Green Mill Cocktail Lounge on December 7th and 8th, 2012

Special thanks to Dave Jemilo and Jaki Cellini for organizing these concerts in honor of Jeb Bishop’s 50th birthday.

Green Knights is the only document of a radically new approach taken by a collaborative working band that became an important part of the Chicago improvised music sound from 2005-2013. Although The Engines released three other commercially available recordings during their time as a working band (The Engines – 2007, Wire and Brass – 2010, Other Violets – 2013), none of these documents reflected the shift that began in 2010, when the band stopped performing their compositions as discreet individual units, like a typical jazz band, and began leaving the introduction of pre-composed material up to any individual band member to bring in at will. (Although Other Violets was recorded in 2011, long after this shift began, the band moved somewhat backwards in terms of the openness of their approach in order to accommodate special guest John Tchicai, a project which the band members nonetheless agreed was worthwhile despite the need to temporarily eschew their new aesthetic).

This shift significantly altered the way the band sounded and worked. No longer did they simply set an order, and play their charts down with some improvising sections in the middle. Instead the band would often begin sets as open improvisations, leaving the choice to bring in (or not bring in) material up to any individual member. Other band members were free to respond to such choices as they saw fit, which meant that compositions might also be used in whole or in part – a vamp from one tune might crop up in the middle of an improvisation, but never lead to the melodic material that might otherwise have accompanied it. At other times a melodic kernel might float around as a background to a solo, before another band member introduced a different composition altogether, leading the band down a completely different rabbit hole. And sometimes material might be juxtaposed, with half the band choosing one route, and the other half simultaneously taking the other. Of course, as you’ll hear on this recording on multiple occasions, the band was sometimes perfectly happy to collectively dive into the material head-on as well.

This approach opened incredible new possibilities for the group. No longer was their improvising limited to the allotted sections within a tune. Instead it became possible to spontaneously arrange the entire structure of a set from the ground up, and to drastically rearrange pieces at any moment based on subtle shadings such as a slightly different inflection in a melody, or somewhat altered tempo. This flexibility of course demanded a familiarity with the material that was extreme; each member had to know every line, harmony, vamp, and rhythm through and through to make this open-ended approach possible. In fact, during this period, the band purposely learned all of their composed material strictly by ear, so that there was no possibility of ever falling back on a chart or “stock” arrangement at any time. The writer of a particular tune would simply lead the band slowly through every line and counterline of a piece during rehearsals until each member knew them cold.

This particular recording was made over two nights in December of 2012 live at Chicago’s legendary Green Mill Cocktail Lounge as part of trombonist Jeb Bishop’s 50th birthday celebration, and it does a great job of showing these tactics at work. Although in this context – a packed weekend house at a more traditional “jazz” venue - the band opted to begin each improvisation with one of their tunes, you can hear them employ these arrangement tactics over and over once they make it through the first lap. So although you’ll hear a couple of the same compositions performed from one night to the next, that material is sandwiched in between the other pre-composed material in drastically different ways with no pre-conception or roadmap of what might come next.

These gigs would serve as the penultimate chance to hear the band at work, with Bishop having already decamped to North Carolina in summer of 2012, and bassist McBride soon to head to Boston in May of 2013. These moves effectively ended the ongoing work of regular gigs and rehearsals that the band undertook for 7 full years. With only one more performance at the Chicago Jazz Festival in August of 2013, their era as a regular working ensemble was at its end. We’re especially happy to be able to present the final culmination of those years of work here.