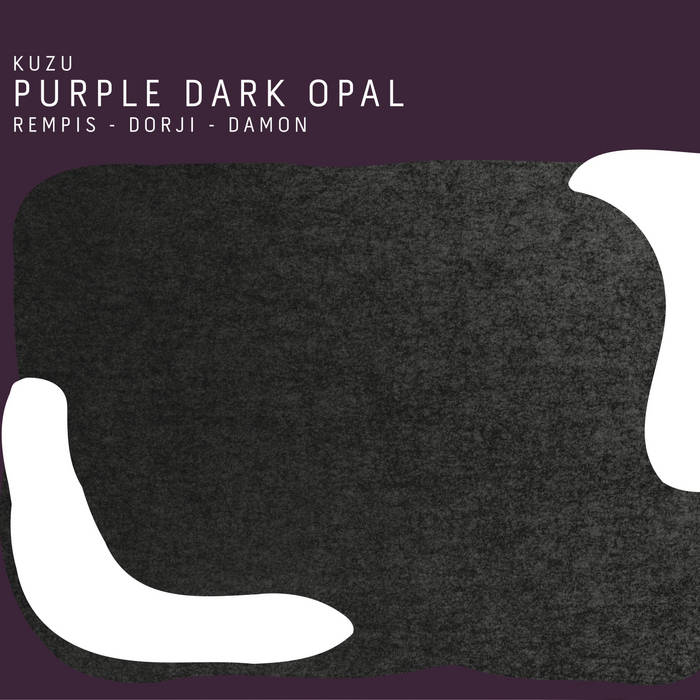 ALL ITEMS PURCHASED DIRECTLY FROM AEROPHONICRECORDS.COM ARE ARTIST DIRECT AND DO NOT INCUR A SIGNIFICANT DEDUCTION BY BANDCAMP!!

Purple Dark Opal is the second release by the working trio Kuzu, a band whose deep roots in disparate musical traditions delivers a sound that’s not only new, but totally organic. Saxophonist Dave Rempis is best known for his work in the improvised music scene in Chicago, often exploring areas at the farthest edge of the jazz tradition. Guitarist Tashi Dorji, a native of Bhutan, came up through the active noise scene in his home base of Asheville, NC. The last decade has found him deep in that world nationally and internationally, putting out ear-splittingly in-your-face solo records, regularly opening for Godspeed You Black Emperor on their concert tours in the US and Europe, and touring frequently with duo partners Thom Nguyen, Mette Rasmussen, and Kuzu drummer Tyler Damon. That last pairing was the band that caught Rempis’ ear a few years back, and Damon is clearly the musical link here – someone who works comfortably in the avant-garde jazz scene in Chicago, as well as in the rock and noise world holding the drum chair for Circuit Des Yeux, Thee Open Sex, and in his duo with bassist Darin Gray.

After their first concert outing in the fall of September 2017, the three left the stage exhilarated, and knew immediately that this was a BAND. Immediately planning more work together, they released that concert as an Astral Spirits LP titled Hiljaisuus in August 2018, later released on cd by Aerophonic Records. That fall they did twenty dates on the road in the US, rolling up their sleeves to develop a promising union into a real working unit. The results of that effort are documented here on Purple Dark Opal – recorded live in Milwaukee, WI as concert number fifteen of that extended run.

And what do we find after all that work? Rempis’ penchant for pentatonic melodies and rough and tumble timbres combines seamlessly with Dorji’s thick, raw sound and singular approach to intonation, buttressed by Damon’s rapid-fire yet powerful stickwork, to produce a music that’s exquisitely detailed at any one point in time, yet carries the narrative arc of the lengthy piece presented here without ever losing its coordinates. In this music you can hear the many hours together in a van roaming the hills of Tennessee and Pennsylvania, the plains of Texas and Illinois, and the forests of North Carolina and New England, trading playlists ranging from jazz icons like Pharaoh Sanders and Yusef Lateef to Scandinavian black metal bands like Craft and Darkthrone. While this isn’t a new thing in creative music – broad ears are a trademark of musicians in this world - what makes the pairing so unique is the truly organic way in which they string these influences together into a coherent sound. This isn’t a Frankenstein pastiche of bits and pieces held together with duct tape and glue, and a paper-thin conception. This is an emotionally deep and sincere effort to join genuinely disparate influences arrived at only through patient toil. When we ask if Rempis is channeling Coltrane, or a Turkish clarinet player; does Dorji sound like a Delta bluesman, or a southeast Asian rocker from the 70’s; is that Art Blakey or John Bonham rolling out through Damon’s toms; the answer is undoubtedly all of the above. And yet, despite the breadth of the trio’s inspirations, their music never collapses under the weight of its aspirations, fearlessly carving out a new corner in the broader sonic landscape.